At last a fish! 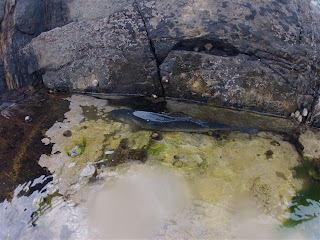 Well....after a LOT of effort a small reward....a perfect bar of silver....
I was spinning for a long time ..moving around and that when i got a follow, about half an hour later another follow...no take, so i changed the lure to a feed shallow UB15 and first cast...bang!
Now after that I used the lure again and nothing for the rest of the evening...a lucky cast i think?
I was going to video her under water, but she had other plans!
Can you spot her?