Dusting off the beach caster.

Got my beach casting gear out the other night to try for a cod or whiting off a Cork beach.The rod is a Century 14" with a Penn Surf master 70 reel and Penn long distance Surf Co-polymer line.
My rig was a home made 70lb body with a single snood clip down (Gemini clip) with a size 4/0 Kamasan B940 hook ..all ending in a break out lead about 4oz.
The idea is to chuck a big bait out(tied on with bait elastic) as far as possible at night and hope a big fish will slurp it up
The bait i had were some Razor clam i collected a few months ago and frozen down, and some Ammo blast frozen Mack.
I set up and cast out and it flew away nicely.....so i hadn't lost my touch after six months of lure casting!!
Or so i thought ...the next one cracked off mid cast, and i stood there in the dark up to my waist in water, with one hand over my head and eyes squeezed shut waiting for the return to earth!
Very nice......
Anyway................after several hours fishing all the baits came back untouched (not even crabs about).
Then i had one massive bite and the rod slammed over and and back ...i waited...nothing.... after a while i inspected the bait and it was torn badly .....something big??
A Bass??
Who knows?
Nothing more for the night and home i went.
I dont mind too much because i got the gear out and it all works (apart from catching fish). 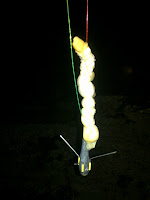 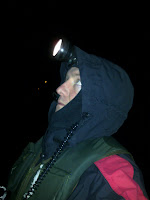 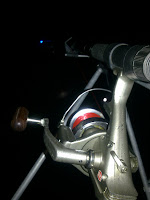 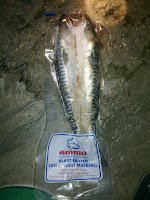 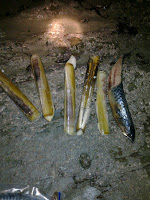