Out at a mark that has a mixture of shallow and deep water, using 15 and 18cm lures.
Landed Two smaller fish about 3.5lb and 4lb on the 15cm lure.(both released)
This mark also has snaggy rocky outcrops under the water with plenty of weed and food i imagine!
Then in the shallow part casting parallel to the shore (not more than 10 feet out) i landed and released the fish in the photo below...5and3/4lb.
Nice fat fish! 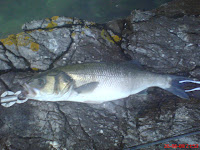 No mack were around, or sprat but this was an evening seis and also had a few bites at the lures.....