Out tonight with the fly rod, and because it was low water i had a "gurgler" fly on...and a floating line.
This will skim over weed beds and greatly reduce snagging..
The one i used also has a weed guard on it....
Standing on the shore line i cast about 15 feet out just beyond a kelp bed..the fly hit the water and one twitch...BANG....an explosion of water...FISH ON!
A nice fight followed with the fish making two or three runs and then i beached it over some sea weed...Photo shoot and back it went no problem...it was very lightly hooked....A RESULT!
Big grin on my face...i had two more follows but no more takes...... 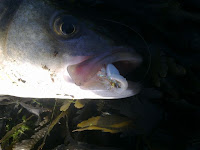 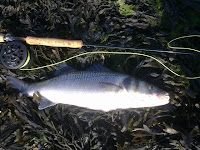 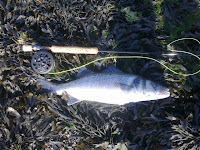