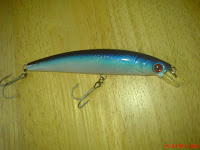 Got up at 5.30 this morn to go Bass fishing, but was delayed waiting for my wife to get home from a party.

She eventually arrived back at 5.45!! Party animal!
straight in to the car and off to an east Cork mark.
Big tide 4meter+.
Water was clear-ish but with lots of red weed in it which proved hard at the start, but as the tide pushed in it pushed the weed in to.
This Mark is on rocks fishing over a shallow rocky reef full of weed and gullies.
It took a long time to connect to a fish and 3/4 hour before full tide i hit the first one. 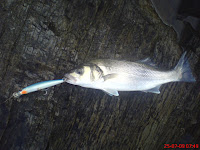 Then a lovely fish a good 4lb 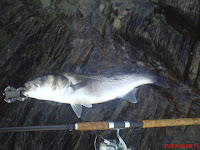 After that i struck into what i thought was the reef until i was nearly pulled in!!
A really good fish on and i hoped the hook's would hold as i had crushed the barbs after the first fish......
DISASTER... i saw the fish come up head first and shaking the lure...it flew out and the fish was gone...ah well...
I adjusted the clutch(should have thought of that earlier!)and cursing myself i fished on..... 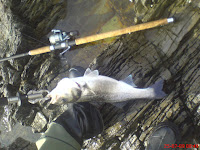 A great morning's fishing!
Pity about the big one ...B.T.F! (but that's fishing)
ALL FISH C&R.